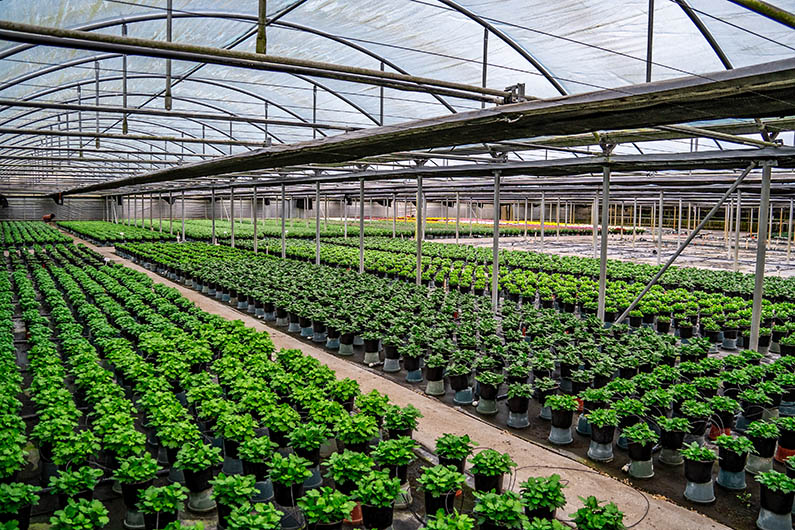 Read the article
From the October 2006 Edition

Craig Roth knew in high school that he wanted to be an entrepreneur. So much, in fact, that he didn’t wait to finish school before starting a lawn-service business, employing 10 by the time he graduated. And college: who needs it? Not when you’re able to transform a putt-putt lawn service into a significant nursery supplying flowers and plants to the big boys like Wal-Mart and Home Depot. Twenty years out of school, Roth is president of his rapidly expanding Sunshine Growers Inc. What business acumen he developed in managing a 60-employee operation has been “on the grow,” so to speak.

“That’s the kind of leader Craig Roth is,” says longtime friend and colleague Dennis Harrison, president of Sunshine Interiors. “In high school, he was in DCT.” Diversified Corporate Training permits a student to attend school part-time while working.

Highlands Lawn Service, which Roth co-founded in high school with his brother Scott and friend Shane Weaver, achieved instant success, and as the trio developed their skills, their endeavor expanded to include additional duties, such as growing flowers.

In 1986, the young men banded together to purchase a 60,000-square-foot property, formerly known as the Jack Bailey Flower Farm, in the hopes of starting a business cultivating flowers. That’s when Roth established the Lakeland-based Sunshine Growers Inc. (www.sunshinegrowersinc.com), which has since expanded to include locations in Plant City and Fort Meade.

Right from the outset, Roth was keen on establishing connections with prospective clients, and this ambition was soon realized as Sunshine Growers acquired two of its first major customers: Wal-Mart and Publix. “In the beginning, we were very small, and we didn’t have a lot to offer,” says the 39-year-old Roth. “Wal-Mart and Publix were very willing to give us a chance. I think it was more our relationship with people that got us in the door because there’s a lot of people out there pushing products. But I think we have some of the best long-term relationships with all of our customers.”

Roth says Sunshine Growers earned Wal-Mart’s attention, not because of its accomplishments but its promise. Although Roth and company were still relative newcomers to the business, he says their dedication, product quality and organization persuaded Wal-Mart to carry the company’s products. At the time, Wal-Mart was new in the area, and Sunshine Growers resolutely pursued its business. By forging relationships early on, Roth was given the opportunity to attend a district meeting, leading to the creation of his firm’s partnership with Wal-Mart.

While the deal with Wal-Mart was a coup in the early years for Sunshine Growers, it also posed a major challenge to Roth. This new client instigated Sunshine Growers’ first expansion, as it was compelled to accommodate the needs of the mammoth retailer. Driven by increasing demand, the company has gradually enhanced its product line.

From its initial service of a handful of Wal-Mart stores, Sunshine Growers now distributes plants to approximately 250 of its garden centers and SuperCenters in Florida and Georgia as well as to 250 Publix stores on a weekly basis.

This hefty figure is due in large part, says Roth, to the fact that Sunshine Growers is allowed to use Wal-Mart’s own distribution centers. This gives the company the ability to supply a number of stores while only traveling a fraction of the distance. Also, as Wal-Mart has developed into the most prominent retailer in the nation, Sunshine Growers has been able to acquire additional distribution points, including the Wal-Mart-affiliated Sam’s Club.

That growth has benefited Roth’s company. “As a result of increased sales, we have expanded our facilities and our management team,” he says.
What’s more, by traveling to the various Wal-Mart stores, Sunshine Growers has secured other clients in proximity to its Wal-Mart customers. What we’re trying to do is go to fewer stores and deliver more products at one time,” Roth explains.

In this way, Sunshine Growers has grown remarkably. For example, just five years ago, the company was serving 40 Wal-Mart SuperCenters, and now it supplies 120 of them. In its first year of business, the company managed to earn a respectable $352,000 in sales, even with a small staff of eight. Now, Sunshine Growers has about 60 employees, has delivered over 1.5-million plants in the past year and has added Home Depot to its impressive client roster. In 2005, the company’s revenues were $5 million, with up to 95 percent of its business coming from its high-profile customers.

Meanwhile, its original 60,000-square-foot site has stretched to 53 acres of land, including 16 acres of greenhouse and shade house. According to Roth, Sunshine Growers has expanded about 10-15 percent each year. Its product line includes poinsettias, Reiger begonias, calandivas, vegetable plants, florist mums, mini roses, Gerbera daisies and New Guinea impatiens.
The past year is particularly noteworthy for its dramatic expansion. In February, the company purchased property in Plant City, followed by the spring purchase of the Fort Meade location. Staff has doubled since the previous year, while sales are up 47 percent.

Ironically, while Sunshine Growers has continued expanding, many of its competitors have faded. “A number of our competitors have sold out their property to developers and moved to other places,” Roth says, so that has given those that are left more market share.”

Reasons for its continued success, he adds, are the company’s commitment to serving its customers and giving back to the community. While Sunshine Growers has long been involved with national organizations United Way, Mission of Mercy and the Boys and Girls Club, Roth has also reached out to his immediate community through various local churches, nursing homes and other organizations. The company has sponsored golf tournaments, aided in hurricane relief and donated thousands of dollars of its products to charitable events.

Through its Share the Sunshine program, the company has also attempted to help its employees grow, providing them with opportunities to extend their education. Consisting of educational and charitable functions of the employee’s choice, this program is designed to stimulate both personal growth and community involvement. Roth says that Sunshine Growers is also looking to improve its employee training and education procedures.
“He’s very much a people person,” says longtime friend Harrison. “He and his family have done everything they can to help their employees on whatever level that those employees need.”

While the company’s philanthropy may have contributed to its success, Roth feels that a strong point for Sunshine Growers is its reliability. “We try our best to always follow through, do what we say we’re going to do and if we can’t do something, we’ll tell you.” Roth anticipates continued growth. By 2010, he projects that Sunshine Growers will hit $7.5 million in sales. In addition, the company is currently searching for a few additional team members to round out the staff roster, and several new products will be introduced, joining 10 recent additions.

Roth wants to revolutionize the method in which Sunshine Growers grows and distributes its products. “Over the next few years, we’re looking to get all the processes in place to simplify the way we’re doing things,” he says. “With the change in generations, I know there’s going to be some changes coming up in the way they see our products. So we’re beginning to try to see what changes we have to make.”

One innovation he has in mind is to increase the automated processes for maintaining the plants. The blooming, potted plants that Sunshine Growers specializes in can take up to 16 weeks to grow. Roth says the amount of attention required to properly cultivate the products can be overwhelming, especially considering the volume of plants involved. In the holiday season alone, Sunshine Growers distributes over 275,000 poinsettias to various customers.

Another challenge is the increasing difficulty in locating qualified individuals as employees. Citing the physical nature of the work and the dwindling interest of today’s students, Roth believes that, while the industry itself has grown, far fewer people are willing to invest their careers in it. Roth says more automation will help to relieve some of this pressure. Nonetheless, the company is refining its hiring incentives — including paid vacation, health insurance and annual bonuses — in the hopes of recruiting more skilled staff.